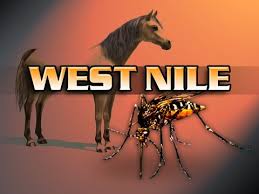 On August 21, the Ontario Ministry of Agriculture, Food and Rural Affairs (OMAFRA) was notified of two positive test results for West Nile Virus (WNV); one from a 10-year-old gelding in Simcoe County and the other from a 25-year-old mare in Bruce County. The Simcoe County gelding was euthanized after developing severe neurological signs and seizures. The mare developed severe neurological deficits in all four limbs as well as facial hyperaesthesia and is recovering under veterinary medical supervision.​

Veterinarians in Ontario should consider WNV as a differential diagnosis in horses with neurological signs and can identify positive cases through appropriate testing. WNV is an immediately notifiable disease under both the federal Health of Animals Act and the provincial Animal Health Act. Signs of WNV (such as lethargy, ataxia, facial tremors, muscle fasciculation and limb paralysis) can mimic a variety of encephalitides including rabies, Eastern Equine Encephalitis (EEE), hepatic encephalopathy, equine protozoal myeloencephalitis (EPM), and equine herpes virus 1 (EVH-1).

Effective equine vaccines for WNV are available and veterinarians should ensure that vaccinations are up to date in their clients’ animals. There is no vaccine for humans and no treatment, other than supportive, once a person is infected.

West Nile Virus is endemic in Ontario and cases occur in the horse population at varying levels each year. Most equine cases of WNV occur between August and September, although cases can occur in October if environmental conditions permit the survival of the mosquito vector species. Ontario’s local public health units are currently conducting mosquito surveillance. Birds are the natural host for the virus, which is transmitted to horses and humans by mosquitoes which have bitten an infected bird. As of August 19, 2017, there have been 14 reported (confirmed or probable) human cases of West Nile virus infection in Ontario. As well there have been 264 positive mosquito pools, from 26 different health units, identified across the province.

WNV infections have been reported in a wide range of animal and bird species, including horses, dogs, cats, deer, crows, chickens, geese, jays, raptors and owls. Horses and birds of the corvid family, including ravens, magpies, jays and crows, are particularly susceptible to WNV.

Positive equine cases of WNV in Ontario, when identified, may be followed up by the local public health unit to determine the vaccination status of the horse and whether the exposure of the horse was local or travel related. The public health unit will also ensure that human exposure to mosquitoes in the area which may potentially be carrying WNV is minimized.

Depending on the time of year, the owners of properties on which a positive equine WNV case is diagnosed may be asked to allow public health mosquito traps to be placed around their property for surveillance purposes – there is no cost to the property owner for this.

Since September 20th, 6 cases of WNV in Bruce County, Simcoe County, Durham County, Grey County, Sudbury District and the Regional Municipality of Niagara were reported to the Ontario Ministry of Agriculture, Food and Rural Affairs. The horses included 4 geldings and 2 mares with ages ranging from 2 to 15 years. Clinical signs ranged from hind end weakness and lethargy to recumbency, facial paralysis and severe hyperesthesia. Three of the horses were euthanized and three are recovering under veterinary supervision. Five horses were unvaccinated and one had an unknown vaccination history. The total number of cases reported in Ontario this year is 18.