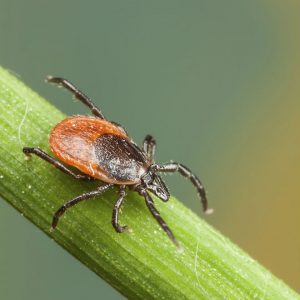 Veterinarians have been tracking ticks that could lead to Lyme Disease longer than public health units and family doctors, according to one Ottawa veterinarian. Deer Ticks (pictured right) carry Lyme Disease which is more dangerous to humans than animals.

The total number of ticks is growing, mostly in areas of southeastern Ontario. The burrowing bugs nestle their way into the fur of dogs, according to veterinarian Jane Gates, who also co-owns Fisher Glen Animal Hospital in Ottawa.

Gates says veterinarians have been studying and tracking Lyme Disease since the late 1990s as ticks were removed from dogs and sent in for testing.

Though the disease is dangerous, public health units have only recently studied humans for Lyme Disease. Which is something that’s received criticism from people like Myrna Lee Decou. Decou’s daughter suffers from Lyme Disease, but the research in Canada is limited, according to the Ottawa mother.

“The people who are keeping the statistics are vets,” said Decou. “If you want to know how many ticks have bitten dogs and have Lyme Disease, in the Ottawa Valley you can find it … (vets have) much, much better ideas than … our public health units.”

The disease was first recognized in 1975 in Lyme, Connecticut, but almost four decades later it had made a “slow and steady march” upwards, according to Gates.

Humans in More Danger than Animals

Dr. Gates understands that humans are more likely to get sick from ticks than animals, so she often warns the owner when she finds one.

“When I’m doing the screening test I say, ‘I’m doing this as much for you as I am for your dog because your dog’s not that likely to get sick,” Gates said.

“But if your dog is positive that means you’re walking in tick-positive areas and you need to be aware of that for yourself.”

Gates also said an Ottawa lab is collecting tick and Lyme Disease statistics to help map the spread. Ottawa Public Health officials are also testing ticks as it reported the highest number of local cases ever in 2013, with 47.

On Thursday, a private member’s bill from Green Party leader Elizabeth May will arrive on the floor of a House of Commons committee. It calls for a national strategy to tackle the chronic condition of Lyme Disease.